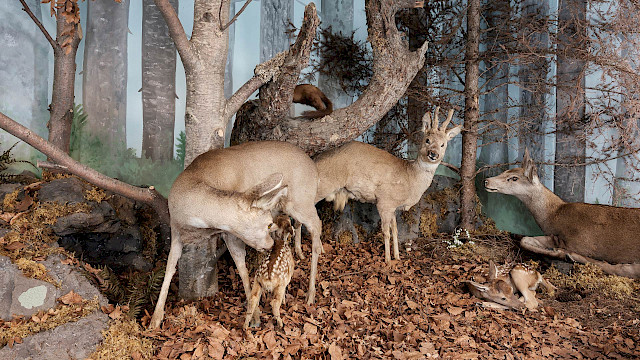 In the diorama of the woods, the hazel grouse and capercaillie show us their different reproductive strategy: the first being similar between sexes and well camouflaged as both are involved in brooding; whereas the male capercaillie has a showy plumage, since it is only the female who takes care of brooding. Among the small mammals you can see the bank vole, red squirrel, garden dormouse and dormouse, all potential prey for pine marten. It is also possible to observe the roe deer, the most common ungulate in these wooded areas.

Representing high mountain environments, the wallcreeper searches for insects in cracks in the rock, while the golden eagle nests on vertical walls and hunts marmots in alpine meadows. The chamois is one of the more widespread mammals, while the ibex is recolonizing the areas from which it had become extinct.

The diorama dedicated to the valley floor is the largest and hosts a variety of animals, from the fox, present in several environments, to the very rare polecat, a representative of the mustelid family together with beech marten, weasel and badger. The imposing eagle owl nests in the ravines and hunts in the valley floor, even very large prey, like the common hare. One particularly impressive area rich in birdlife is the Pian di Spagna-Lago di Mezzola Natural Reserve, a wetland of international importance for migratory birds such as the northern lapwing, curlew, the common sandpiper, snipe and the little ringed plover.

The last two small dioramas show us the extraordinary camouflage qualities of the rock ptarmigan, the mountain hare and the stoat in one diorama and the other a cross-section of nocturnal life in the countryside.